Dynamos Football Club players took time out to mingle with fans at different N.Richards outlets where the glamour

“Its an honour to be an ambassador of our sponsors as they market their products. Mixing and mingling with the fans has been very nice. We have not been playing football so its been a while since our fans last saw us on the field of play and coming here and interacting with them is a very good thing” said Godknows Murwira.

Club captain Patson Jaure was elated to be involved in an intiative which sees the glamour boy’s playing a key role in promoting their sponsors brand, “I am very happy to be here with the fans as it has been 8 months since we last played the game and interacted with them. The interaction has been great especially given the fact that some have come to the stand and shared some advice with us”.

Also part of the activity was Kudzanai Dhemere and Jarrison Selemani who were stationed at N.Richards Graniteside with Munyaradzi Diya and Ngandu Mangala in Msasa.Consumers of Remington gold products will stand a chance (to win a bicycle) at each participating store. The main draw will be conducted by Dynamos head coach Tonderayi Ndiraya. 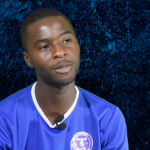