Munyaradzi Diya eager to challenge for a place

Veteran goalkeeper Munyaradzi Diya is keen to work hard and challenge for the number 1 jersey at Dynamos despite the coming in of Taimon Mvula who is set to add competition between the sticks.

Diya says he has a lot to offer having had stints with the Dynamos, How mine, and Highlanders. The dembare goalminder believes through hard work he can challenge for the number 1 jersey despite facing stiff competition, a scenario he says is healthy for the club,”Obviously we have quality personnel between the posts and for me it is a challenge and that is what football is all about. I will just do my part in terms of contributing to the team and it is obviously good for the team knowing that they have quality players in the goalkeeping department”, said Diya.

Simba Chinani is rated as one of the top goalkeepers in the country while former Hwange goalminder Taimon Mvula is also highly rated. With Diya also available this leaves the glamour boys with a healthy situation between the posts.

There is a similiar scenario of competition in other positions after the club acquired several top players.  Tanaka Chidhoba, Tinotenda Chiunye, Albert Eonde, Byron Madzokere, Sylvester Appiah and Juan Mutudza are among several signings made by dembare. 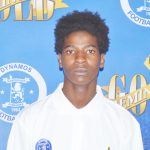